Zakynthos is one of the Greek Ionian Islands located off the west coast of Peloponnese. It is one of the greenest and most beautiful islands in the archipelago and boasts superb sandy beaches. The busiest seaside resorts rival those of Corfu in terms of their frantic nightlife and all-action beach scene. But if you venture further afield than the main resort areas, you’ll find some lovely secluded coves, dramatic mountain sceneries, and unspoiled inland villages.
As some archaeological excavations have proved, Zakynthos was inhabited during the Paleolithic and Neolithic Ages. The island was significant during the Mycenaean period, as mentioned three times on Linear B tablets from Pylos. Homer, the ancient Greek poet, mentioned the island in the Iliad and the Odyssey, stating that the first inhabitants were the son of King Dardanos of Troy, called Zakynthos and his men. The island was then conquered by King Arkesios of Kefalonia and then by Odysseus from Ithaca.

In Zante, you may find yourself swimming alongside the beautiful loggerhead sea turtles, which use the soft sand of the south coast beaches as their nesting grounds. Sadly the turtles, which have been migrating to these shores from Africa for thousands of years, are now one of Europe‘s most endangered species primarily because of the ravages of mass tourism. Environmentalists increasingly find themselves at loggerheads with the tourist industry, which has fiercely resisted various controls designed to protect the turtles. The tourists themselves will ultimately have to take responsibility for the demise or survival of these delightful creatures. Rules such as the ban on visiting designated areas from dusk till dawn during the breeding season should be strictly observed.

The island’s top resort is Laganas on the south coast, where 14 kilometers of golden sand gently shelve into the shallow water. The main beachfront is chock-a-block with bars, restaurants, hotels, and apartment blocks. You’ll find all kinds of watersports and leisure facilities there, including ballooning and glass-bottomed boat rides. And if you’re after 24-hour partying, Brit bars, curries, and quiz nights, then this is the place for you.

A relaxing yet up-coming resort is Kalamaki on the southeast coast of the island, about 3km from the lively resort of Laganas, where the colonies of loggerhead turtles are the star attraction. Thanks to the friendly locals, there is still a traditional welcome for holidaymakers of all ages. Kalamaki's long beach is the extension of Laganas' golden sandy coastline, with crystal clear blue water. Apart from pedaloes and canoes, you won't find many watersports as the safety of the turtles is a priority.

On the north coast of Zakynthos, you will find the district of Skinari, which comprises several villages, including the traditional mountain village of Volimes. The area is also home to the port of St Nikolas, the natural health spa Xigia, Makris Gialos, Mikronisi, the stunning Blue Caves, and the most famous landmark of Zakynthos, the Shipwreck cove.

On the unspoiled west coast of Zakynthos is situated the pretty mountain village of Agios Leon. It is named after a Bishop of Catania in Sicily, who was canonized and became Saint Leon. In the 14th century, an alluring church was built in his honor. The village of Agios Leon owns another beautiful chapel, which is unique on the island as its bell tower is housed in a windmill. There are a handful of shops with local handmade products, and the area is easily accessible by car, providing the chance to see some beautiful sceneries while driving there.

A very winding and dramatically scenic drive will lead you to the Vassilikos peninsula on the island's southeast coast. The surrounding countryside is just waiting to be explored. This deep in the south area consists of small settlements and boasts some of the most wonderful sandy beaches on the island. St Nicholas Beach is gently shelving to the sea, offering a picturesque setting. Overall, watersports are widely available, but this beach is reputed to have the best scuba diving facilities on the island. Also, this is a perfect holiday spot for families and couples alike.

Located on the island's southwest coast and tucked into the corner of Laganas Bay, the pretty fishing village of Keri Lake is the waterfront harbor of Keri mountain village. The pebbly beach offers a lovely view across the bay to the Vassilikos peninsula and the golden sands of Gerakas beach. Furthermore, the waterfront is dotted with traditional tavernas, shops, and bars. The small harbor shelters local fishing boats and day-trip boats that provide trips to the stunning Keri Caves and the little island of Marathonisi (Turtle Island).

One of the most captivating scenic spots on the island's northeast side is Amboula – Psarou between the resorts of Amoudi and Tsilivi. The village is uncommercialized and, therefore, still traditionally Greek. Idyllic as no other, it's a quiet and peaceful haven with magnificent views over the Ionian Sea. Clear days here will give you the opportunity to see the island of Kefalonia.

Extremely popular, and one of the top resorts in Zakynthos is Tsilivi. Ideal for families and couples, it is located on the northeast coast of Zante and it's famous for its lovely beach, the proud recipient of the prestigious Blue Flag award. The beach is a long (2km) stretch of soft golden sand that gently shelves into the crystal clear warm water, meaning it is safe for children and swimmers of all levels. Watersports are also available at the beach, perfect for adventurous travelers; why not try something new and exciting?
BACK TO EXPLORE ZAKYNTHOS
HOMEACCOMMODATIONROOF GARDEN RESTAURANT & BARBREAKFASTPOOL AREAFACILITIES & SERVICESLOCATIONTHE HOTELEXPLORE ZAKYNTHOSSTAY SAFE COMMITMENTGALLERY
Follow us 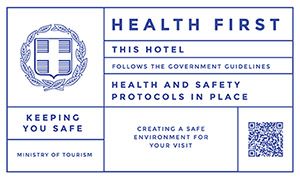